Click play above to listen to audio of this webpage text. 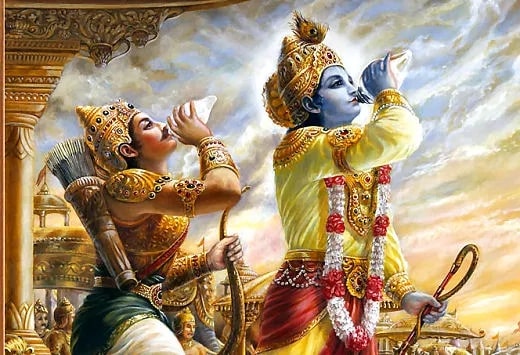 The following description of the Vedas was written by Author Marcus Schmieke: “The wisdom, insight and knowledge of the Vedic scriptures enable every human to follow his path toward spiritual development and to achieve complete physical, emotional and interpersonal wellbeing. The Vedic way is not a religion it can be followed by peoples of all faiths.”

The Vedas.. are the legacy of mankind’s oldest advanced civilisation and for several reasons quite unique. Nevertheless, people in today’s Western civilisation know almost nothing or have completely false conceptions about them.. The Vedic scriptures are not, as is often believed, an Indian Bible in the sense of a doctrine.. they are much more universal: an extremely extensive work on all kinds of topics that concerned (and still concern) all aspects of human life.  The Vedas contain texts on architecture, on music and theater, mathematics and logic, religion and philosophy, astronomy and astrology, politics and history, medicine and nutritional science and even space travel. ‘Veda’ simply means ‘knowledge’.

I turned to studying the Vedas quite early in my life.. I had initially been disappointed with science, especially physics, which quickly turned out not to be the straight and pure path toward knowledge as I had hoped it would be… There is also a striking consistency of the Vedas with all other works that claim divine origin. The Vedas eliminate the contradictions that exist between all these other scriptures and resolve them into a higher understanding.”

One of the subjects described by the Vedas is Dharma.

“The Sanskrit word ‘dharma‘ means the role I am assuming in the world and what the meaning of my life, my personality, and my actions is supposed to be. The word also stands for ‘morals’ and ‘ethics’ in a Western sense..”

Books related to the Vedas on subjects such as science, economics, philosophy, consciousness, archeology and the ancient history of humanity, intelligent design, art, cooking, music, ayerveda, etc are available at:

For example, I found the following books to be very interesting: ‘Spiritual Economics’ by Dhanesvara Das; ‘The Second Path’ by Marcus Schmieke; ‘Transcending the Global Power Game’ by Armin Risi; and ‘Rethinking Darwin’ by Lief A. Jensen; ‘The Forbidden Archeologist’ by Micheal A. Cremo; ‘Natures IQ’ by Micheal A. Cremo; ‘Divine Or Demoniac?: Spiritual Movements and the Enemies Within’ by Dhanesvara Das.

The Bhaktivedanta Book Trust (BBT) is the world’s largest publisher of books concerning Krishna and the philosophy, religion, and culture of the Vedic Gaudiya Vaishnava tradition. The Vedic theology of personal god is close to Christian theology, both personal and monotheistic.

Translations of the Vedas by A. C. Bhaktivedanta Swami Prabhupada

His translation of and commentary on the Bhagavad Gītā, titled Bhagavad-gītā As It Is, is considered by many Vedic scholars as the finest translation into the English Language of Vaishnavism literary works. A. C. Bhaktivedanta Swami Prabhupada authored more than eighty books on Vedantic philosophy, religion, literature and culture.with many available online at:

He directed the founding of the Bhaktivedanta Book Trust, which claims to be the world’s largest publisher of ancient and classical Vaishnava religious texts.

“Human prosperity flourishes by natural gifts and not by gigantic industrial enterprises, which are the products of a godless civilisation and cause the destruction of the noble aims of human life”

“Human civilisation should depend on the production of mother nature without artificially attempting economic development to turn the world into a chaos of greed and power..”

“..their (material) reality is a dog’s race, and our reality is to advance in self realization (God Consciousness)….In the Vedic system people are not lazy they are busy working for a higher purpose.”

“… society should be guided by the ‘brain class’  of priestly, thoughtful men… The main thing is, society must learn to discriminate between pious and sinful activities. Human beings must engage in pious activities, not sinful activities. Otherwise they have no brain. They are no better than animals… Today practically no one is making this distinction… This mean society has no brain. You may create hundreds of organisations, but society will never be happy. That is the verdict…. If society does not know what is sinful and what is pious, it is all useless.”

“Human energy should be properly utilised in developing the finer senses for spiritual understanding. “

Dhanesvara das describes the recommended process as described in the Vedic scriptures for purification and raising consciousness in this current age and states that consciousness can be raised through the prayer and chanting of the Lord’s holy names:

“This means not only to appeal to the Lord in prayer, but to follow His instructions given s religious principles. The second item of significance is that by pleasing the Lord everyone automatically becomes pleased. “

“One should not think that this chanting or mantra is a sectarian affair, that Visnu or Krishna is the name of a ‘Hindu’ God, and is not the name of ‘our’ God. By definition there can only be one God, however he may be known differently through different religions.”

“Srila Pabhupada, a teacher of spiritual intelligence, compassionately alerted the world to the futility of pursuing only material knowledge. He re-articulated, for our current times, the ancient Vedic conclusion warning humans not to waste their higher faculties but focusing on manipulating material nature. If we forget the most important science, knowledge of the unit of spiritual consciousness known in Sanskrit as the atma, we squander our precious human form.”

“Krishna wants to emphasise that the best material knowledge.. cannot compare to pure knowledge of the soul… knowledge of temporary material affairs, can never supplant authoritative spiritual science. We have an eternal spiritual identity different from the body and the mind… we can start to experience the existence and power of our nonmaterial self, the soul. This is where real freedom begins.”

“No amount of altering material nature – no material construction, deconstruction, or reconstruction – can ultimately satisfy the individual or society, because our real problem is disconnection from the Supreme.”

“Therefore we have to engage ourselves in occupational engagements that will evoke our divine consciousness” Srimad Bhagavatam (1.2.8)

Another spiritual tradition from the East is Buddhism

Tara Mantra is pronounced by Tibetans and Buddhists who follow the Tibetan traditions as oṃ tāre tu tāre ture soha. Tara means “star” in Hindi. Tārā is also known as a saviouress, as a heavenly deity who hears the cries of beings experiencing misery in saṃsāra. Meaning of Mantra : OM TARE TUTTARE TURE SOHA Green Tara Mantra is actually a loving play with her name OM is the sound of universe.