Click play above to listen to audio of this webpage text.

Vaccines can harm human health. Corporations whose interest is selling more products and creating massive profits have promoted for decades the illusion that technology will solve the problems of society. In fact many technologies create more problems for humanity. In fact the reality is that much of current technology in common use is very harmful to human health. For example, EMF based technology of WIFI and smartphones, thousands of manmade toxic chemical compounds, certain genetically modified foods, heavy metals, chemtrails, herbicides and pesticides, fluoridated water, toxic pharmaceuticals and vaccines and many more aspects of our high technology society have been clearly shown to have serious damaging impacts to human health, but the narrative that is conveyed to the public via corporate owned mass media does not reflect this reality as massive profits have been made by corporations involved in these and other industrial sectors.

Vaccines are an unsafe technology. The detrimental impact of vaccines to human health is evidenced on VaxxedTV; by Professor Chris Exleys papers on the dangers of aluminium in vaccines; the Vaccine archives website; and by the lectures and research of Dr Suzanne Humphries; the resources available the National Vaccines Information Center; the VAERS Database which list many thousands of documented and reported adverse reactions to vaccines; Glaxo Smith Klines own confidential report, which states that their vaccine caused autism in some children during clinical trials; and decisions of an Italian court, which found that both the MMR and a hexavalent thimerosal- and aluminum-containing vaccine can trigger autism .

“This database contains hundreds of peer-reviewed, published articles on environmental contaminants that are implicated in the rise of the childhood epidemics we are currently experiencing in the U.S. and other industrialized nations. Concerned citizens owe it to themselves and family members to be as educated as possible when it comes to these toxicants, many of which are contained in vaccines. Even very low-level exposures can induce symptoms identical to those of many devastating psychological, neurological and behavior conditions in children and adults injuring the sensory, immune, gastrointestinal and central nervous systems, kidneys and other organs, and interfering with critical cellular pathways. And, it’s not just toxins driving the epidemics. According to the latest research, the body’s own reaction to a vaccine, i.e. immune activation, is enough to trigger conditions like autism and auto-immunity. Scientists from around the world are sounding alarms and voicing grave concerns about the poor health impact of vaccines and the need for vaccine safety and regulatory oversight.”

The National Vaccines Information Center is available at: https://www.nvic.org/

The VAERS Database is available at: http://www.medalerts.org/vaersdb/index.php

Glaxo Smith Klines own confidential report is available at:

An article describing the Italian court decisions finding that both the MMR and a hexavalent thimerosal- and aluminum-containing vaccine can trigger autism is available at:https://www.ageofautism.com/2015/01/recent-italian-court-decisions-on-vaccines-and-autism.html. I list an extract below:

“It is also notable that On September 23, 2014, an Italian court in Milan awarded compensation to a boy for vaccine-induced permanent autism and brain damage. While the Italian press has devoted considerable attention to this decision and its public health implications, the U.S. press has been silent. ..Based on expert medical testimony, the court concluded that the child more likely than not suffered autism and brain damage because of the neurotoxic mercury, aluminum and his particular susceptibility from a genetic mutation. The Court also noted that Infanrix Hexa contained thimerosal, now banned in Italy because of its neurotoxicity, “in concentrations greatly exceeding the maximum recommended levels for infants weighing only a few kilograms.”

Presiding Judge Nicola Di Leo considered another piece of damning evidence: a 1271-page confidential GlaxoSmithKline report (Available at https://autismoevaccini.files.wordpress.com/2012/12/vaccin-dc3a9cc3a8s.pdf). This industry document provided ample evidence of adverse events from the vaccine, including five known cases of autism resulting from the vaccine’s administration during its clinical trials (see table at page 626).”

Vaccines are in direct violation of The Nuremberg Code
Forced, coerced, and mandated vaccination are in violation of these principals.
http://www.dirtybigpharmatruth.com/vaccines-are-in-direct-violation-of-the-nuremberg-code.html 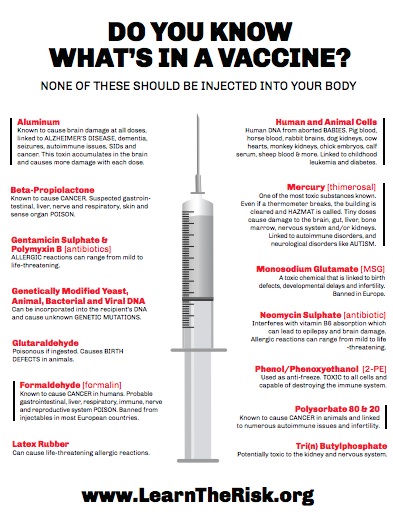 The research of Judy Mikovits, PhD, on retroviruses, vaccines and autism who spent twenty years at the National Cancer Institute, working with Dr. Frank Ruscetti, one of the founding fathers of human retrovirology, and has coauthored more than forty scientific papers. For five years she was the research director of the Whittemore-Peterson Institute for Neuro-Immune Disease.  After she published research connecting retroviruses from vaccines to chronic fatigue she was put in jail for five years.

“Plague is a must-read book so revolutionary in its implications that its author courageously faced character assassination and unlawful incarceration to keep her findings from being relegated to the dustbin of medical history. Riveting, if not at times paradigm shifting, this book reveals a dark side to modern medicine that no one knows exists, but that everyone should.”
—Sayer Ji, founder and director of GreenMedInfo and board member of the National Health Federation. The book is available here:

The propaganda for vaccines increases in the corrupt mainstream media of RTE, Irish Times, Irish Independent – these are propaganda branches of the Irish government (see also the comments of John Waters former Irish Times journalist). The Irish government is completely subservient to the EU since the Lisbon treaty and the banking bailout scam of 2008. The EU is completely controlled by the international central banking system (globalist cabal).
Example: See the outrageous propaganda Irish Times article by Sarah Fulham-McQuillan
Strong legal basis for making Covid-19 vaccinations mandatory
Courts might override individual rights in context of contagious disease
Mon, Jul 27, 2020, 01:44″>Mon, Jul 27, 2020, 01:44

Pentagon Study: Flu Shot Raises Risk of Coronavirus by 36% (and Other Supporting Studies)

“One of the biggest problems, among many, is that if industry-supported research does not find a benefit of the drug, the results are never published; they’re put into a black hole. Only positive studies are published, creating the impression among both doctors and the public that prescription drugs are much safer and more effective than they really are.”

…“The new policy allows drug companies to pay a writer $10,000 annually for editorial reviews. Yet, writers may receive payments from multiple companies, and a company may pay more than one writer, which gives writers multiple sources of income and thus presents a conflict of interest. “… It throws the burden on the reader to discern whether the author was biased or not.  It rewards senior faculty for having financial ties to not just one but multiple companies whose fortunes are influenced by their work. One person said that what the senior faculty really likes, in addition to money, is food, friendship, and flattery, and you see how that works and how that co-opts people who think they’re objective and who want to be objective, but who are in fact so closely allied with the big drug companies that they start to feel their pain.

“ J&J was fined $2 billion in penalties back in August, and some people estimate that that may go up to $6 billion.[ix] However, they’ve made up to $30 billion on Risperdal both domestically and abroad. It’s a drop in the bucket. It’s almost as if we are incentivizing criminal behavior: the profit that drug companies receive far exceeds the penalty of the fine that they’ll have to pay, like you said.

“The problem is that the pharmaceutical industry and other health industries basically own Congress, and Congress essentially owns the Food and Drug Administration.

“The case against science is straightforward: much of the scientific literature, perhaps half, may simply be untrue. Afflicted by studies with small sample sizes, tiny effects, invalid exploratory analyses, and flagrant conflicts of interest, together with an obsession for pursuing fashionable trends of dubious importance, science has taken a turn towards darkness.”
Richard Horton – Chief Editor of The Lancet
source: https://www.thelancet.com/…/PIIS0140-6736%2815%2960696-1.pdf
“It is simply no longer possible to believe much of the clinical research that is published, or to rely on the judgment of trusted physicians or authoritative medical guidelines. I take no pleasure in this conclusion, which I reached slowly and reluctantly over my two decades as an editor of the New England Journal of Medicine”
Dr. Marcia Angell, longtime Editor in Chief of the New England Medical Journal (NEMJ)
https://www.ncbi.nlm.nih.gov/pmc/articles/PMC2964337/

The nefarious pro-vaccine agenda of the EU and the WHO